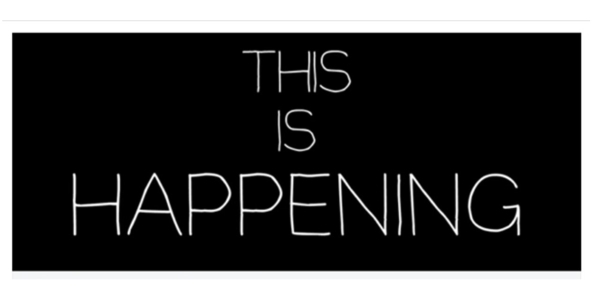 This 420 Movie Review is for “This is Happening,” starring Cloris Leachman, James Wolk and Mickey Sumner. Released in December 2015, This is Happening is the story of a previously estranged brother and sister who embark on a zany road trip to deliver their grandmother (Leachman) to a nursing home. Along the way, pandemonium ensues when a massive amount of marijuana is discovered in the car Leachman’s character is driving.

420 Movie Review Rating for This is Happening: 3 of 5 Stars

This is Happening – Basic Plot

Steve (Judd Nelson) awkwardly asks his son Philip (Wolk) to deliver Philip’s grandmother, Estelle, to a nursing home. Philip reluctantly agrees considering that his father cheaply weaseled his way out of doing it himself and the fact that Philip is a complete pushover. Somehow Philip’s troubled younger sister also finagles her way along for the ride, but she’s got ulterior motives.

This is Happening – Expanded 420 Plot

Philip’s sister, Megan, played by Mickey Sumner, isn’t really interested in accompanying her brother on the grim task of permanently abandoning their grandmother at a nursing home. Instead, she’s looking to hitch a ride to transport 5 pounds of marijuana across the country.

Things begin to fall apart when Estelle discovers what her grandchildren are up to and flees in anger and frustration, unaware that a lifetime prison sentence worth of marijuana is in the car she’s driving. Megan and Philip set off after her.

The plot sounds interesting on paper but on screen it’s weak and not believable. There are a couple of funny moments and one outrageous scene early on, but for the most part I would not call this a comedy. It’s a dark comedy, at best, and the few funny moments seem forced.

This is Happening isn’t truly a 420 movie or a “weed move;” the subplot regarding the marijuana is not at all inherent to the actual plot, which is two siblings trying to reconcile with each other while avoiding the sadness of their mission of dumping their grandmother in a nursing home. There were times where I considered that the marijuana subplot was added simply to ride on the coattails of an exploding cannabis culture and popularity right now.

You could remove the marijuana subplot entirely and the story still stands.

This is Happening – Acting

The acting in This is Happening is tepid. James Wolk is believable but his sad sack character is perhaps too realistic. Mickey Sumner is an adequate actress but has no standout moments in this flick. Fortunately, Cloris Leachman rescues the movie from a 1 or 2 star rating.

I rated This is Happening at 3 stars solely on the merit of Leachman’s acting. If you are looking for a movie that darkly explores the painful struggle of a woman growing old and feeling worthless, then I recommend that you watch This is Happening. Leachman may not be acting; her advancing age is apparent in this movie and no doubt she is probably struggling with many of the same issues her character is struggling with. While I found the movie to be much more sad than funny, I was still considerably impressed with Leachman’s portrayal. If you’re a Cloris Leachman fan, this movie is worth watching. Forget the marijuana connection; it’s virtually irrelevant.

This is Happening – Message

The message regarding marijuana in This is Happening isn’t positive. In one final and climactic scene, Megan is scolded and chastised for her previous “problems” with marijuana. Apparently Megan had been to rehab and her life had been ruined by her marijuana use. Rehab for marijuana? Life ruined by marijuana? This is the same old outdated and backwards thinking that the cannabis movement has been fighting for more than 60 years.

Overall I did not find the marijuana message to be positive in this movie, and it wasn’t funny either.

This is Happening – Conclusion

Cloris Leachman fans will appreciate this movie. If you’re having a weekend of 420 or weed movies and you need some extra content, This is Happening would be an alright choice. Otherwise, if you’re looking for a comedic weed movie that’s actually funny, you might want to consider something else.

DISCLAIMER: I received no compensation, special consideration, promotional or other items or payment or favors of any kind for publishing this review. This review is based entirely on my personal opinion after watching the movie in its entirety and providing my honest thoughts. Your opinions may be different; feel free to share them in the comment section.

420 Movie Review Rating for This is Happening: 3 of 5 Stars

5 thoughts on “420 Movie Review: This is Happening”