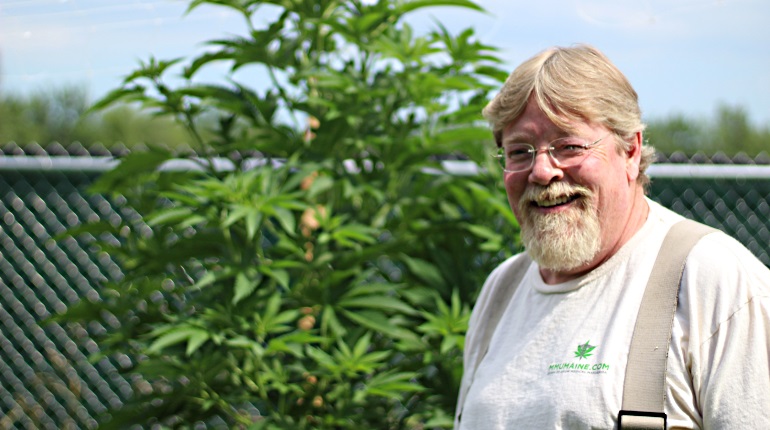 Maine marijuana caregiver King Bishop is one of the most active and well-known caregivers in the state. As a medical marijuana caregiver in Maine, King produces excellent cannabis – nearly all of it grown outside, and entirely managed by hand. King Bishop is also a leading cannabis activist and has been involved in the push for marijuana legalization in Maine for years. An easy-going and calm fellow, King is also a cannabis consultant, but focuses mostly on patient care.

Like many of us in the cannabis industry, King Bishop had a challenging start in life. Like this author, King spent years in the Maine Youth Center – a detention facility for kids. Statistically speaking, this fact left him little chance for success, as most kids in Maine who spend their youth as a ward of the State typically don’t end up well – adult jail, rehabilitation centers, prison, hospitals, and welfare await the majority. But King was different, and he made it out of that system intact.

Over the years, King worked a few different jobs and started several businesses, finally finding significant success running a series of hostels in Florida. He married, reared children, and dabbled in a number of other different ventures. Later, he became a contractor, and his work in this field eventually took him to Maine, where King built many houses and development projects.

In 1999, Maine passed legislation to make medical marijuana legal in the state, but King didn’t get involved in the industry until more than a decade later. When he did, he became a licensed Maine marijuana caregiver, and started growing and producing cannabis for himself, close family members, and a handful of Maine medical marijuana patients.

By the time I met King 3 years ago, he was already considered one of the top caregivers in the state, and he came well-recommended to me by a childhood friend of mine. During our first meeting, I sat with King outside on a veranda, and we looked out over his cannabis farm while we conversed. As King talked to me about his work, I noticed he very much looked the role of a cannabis farmer; he wore a straw hat, white coveralls, and a pair of tan work boots. On one of the boots clung a small marijuana leaf – King had just been manicuring his plants – and I remember thinking to myself;

I want to write about this guy

It took three years for me to get around to writing this interview, although I’ve spent quite a bit of time talking and collaborating with King since then. He became my primary medical marijuana caregiver in Maine, and I’ve greatly enjoyed watching his operation grow in the last few years.

In 2015, King Bishop was running the Medical Marijuana University, in addition to his regular caregiver duties and work. He taught 6-8 students how to grow cannabis professionally. Students were provided with a locked 6’ chain link fence “box” outside to grow in. Each grow cycle, King provided the hands-on training his students needed to learn how to cultivate cannabis safely and effectively.

I audited his operation at the time and was impressed; the students seemed happy, the class content and organization were top-notch, and everything was done within the letter of the law. But the law wasn’t satisfied.

Upheaval and Trouble with the Authorities

County authorities and the Maine Department of Health & Human Services launched a routine inspection and investigation into King’s work in 2015, and quickly condemned Medical Marijuana University. The County tried to shut the school down with threats and sanctions. The State’s position was that, because King collaborated with students, the entire operation was considered a “collective;” a type of cannabis organization that has been deemed illegal in Maine.

But King Bishop isn’t scared easily; he sued Hancock County and won an injunction from the judge, as well as clarification of the definition of the term “collective.” But by then, it was too late; during the court case, King shut the school down for administrative and safety purposes, and he did not reopen it, as by the time the case was decided, too much had changed to continue as before.

In the 2 years since the court case against Hancock County, King has launched a number of new ventures. In addition to his personal hobbies of building cool things, raising cattle, and spending time with his wife Mary and an elderly Boxer dog name Mavis, King also designs and mints pure silver coins for the Maine cannabis industry, makes medicated beef sticks (think ‘Slim Jims,’), and processes cannabis into various value-added products. All of this is in addition to his regular duties as a Maine marijuana caregiver. King’s medicated beef sticks company is called Bad Ass Beef and features a funny slogan, see image below.

This author has purchased hundreds of dollars’ worth of the medicated beef sticks, and they are superb; delicious, convenient, and well-medicated. In general, King has difficulty keeping this product on the shelves, as it’s very popular.

The silver coins King has been minting for the Maine cannabis industry are growing in popularity; this summer, early editions of the coin were trading for more than $130 each.

But King’s most exciting project as of the summer of 2018 is another iteration of Medical Marijuana University; this time, King is teaching students Short Path Distillation. Each class is a private session and takes about 2 days. King is busy with this project, teaching 2 and sometimes 3 new students each week, and then providing consulting services to help those new students start their careers. At this rate, King will be offering this class for at least the rest of the year and possibly longer.

King Bishop’s skills grow exponentially each year, and his value as a top cannabis consultant in Maine grows with it. I’ve audited consultations that King has provided to clients, and his knowledge and presentation skills are excellent. One of the coolest things about King is that, if he’s asked a question that he doesn’t know the answer to, he won’t bullshit you; he’ll tell you he doesn’t know, but that he’ll find out.

King offers consultations primarily about growing and processing cannabis, but recently he’s taken a step back from the drug variety of cannabis a little bit, and is beginning a new focus on hemp and CBD. In fact, King’s in-house laboratory is processing and selling so much hemp-derived CBD that he simply cannot keep the products in-stock. Instead, King is nurturing and advising hemp startups in the state, and teaching traditional farmers that hemp is actually one of our oldest and most “rightful” crops. With King Bishop’s advice in the market, we can hope that one day Maine will be a leader in the hemp industry.

King Bishop is much more than just a Maine marijuana caregiver; he’s a cannabis activist, consultant, farmer, and extracts specialist, and his focus on patient care is well-known around Belfast, Rockland, Augusta, and all the little towns in the region – like this author’s town of Liberty, where several of King’s collaborators and associates also live and work. It’s likely that we’ll be seeing King’s work paying off long into the future, and it’s this author’s hope that the grand and impressive scope of Mr. Bishop’s work doesn’t prevent him from continuing to be one of the most consistent and quality-oriented medical marijuana caregivers in Maine.

Do you know King Bishop? Tell us about your experience with this Maine caregiver in the comments section below.