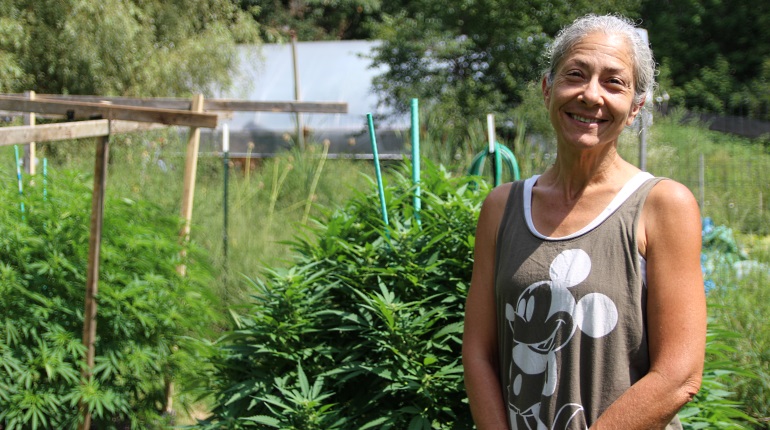 Without the work of Maine cannabis activist Cynthia Joy Rosen, cannabis liberalization in the state would likely be years behind. From working with the Republican party and Governor Paul LePage on reversing bad cannabis policy via bill LD1296, to providing critical cannabis care to community members near Washington and Liberty, Cynthia Rosen has been a powerful force for marijuana in Maine.

From an early age, Cynthia Joy Rosen suffered from sensory confusion. For her, this manifested in unusual sensations and intense feelings, such as being able to “smell” or “hear” color (not uncommon in the animal kingdom; canids and other animals are thought to “see” smells, for instance), “see” sound, and other sensory displacement and confusion. (I’ve added quotations here not to indicate a pseudo-condition or cast doubt on the concept of sensory confusion, but rather because the words in quotations don’t exactly describe the sensation, so readers should take note that the quotations denote the description is approximate.)

Raised softly by conservative Jewish parents, Cynthia’s early exposure to cannabis was limited (neither of her parents used cannabis), and in fact she does not remember the first time that she used the plant personally. However, in 1983 she bought her first nickel bag (a half-gram of cured flower in the Long Island area) for just $5, and quickly discovered that smoking marijuana helped restore conventional sensory functions. Although she didn’t know it at the time, this therapeutic use of cannabis would set the stage for Cynthia to play a major role in the development of Maine’s cannabis laws more than twenty years later.

An activist at heart, Cynthia found herself involved in politics after traveling up the west coast and settling temporarily in Eugene, Oregon, around 1989. There, her main activist function was to convince other people to vote in local, state, and national elections. An energetic and confident young woman, Cynthia was dismayed that many people took a condescending and even snide tone with her, telling her that voting really didn’t matter, saying things like “Aww, you’re so cute and naive, trying to get people to vote!” The general message was that voting and the sentiment behind it really wasn’t effective. People would often talk to her like a child, saying; “you’ll learn.”

Unhappy with this type of attitude, Cynthia continued unabated, lobbying and pressing the local populace to vote, and helping to organize activist efforts. But fast-forward to summer of 2018 in her now-empty and disused greenhouse in Maine, where Cynthia begrudgingly admitted that;

Cynthia’s attitude changed as her activism work progressed, as she soon found herself with access to sensitive materials that suggested that major players on both sides of issues she was passionate about were acting dishonestly, and in some cases, outright dangerously.

“But this didn’t jade my view,” Cynthia assured me, “it sharpened it.”

However, 30 years ago Cynthia was nomadic, and just two years later, we find her in Arkansas, raising her infant son, Noah. Not long after, one of her friends from the area moved up to Maine, and soon talked about the state’s beauty and peaceable communities, enticing Cynthia to scoop her son up and head north.

Unfortunately, by the time Cynthia arrived in Maine, she was dangerously ill. A staph infection ravaged her body and spread aggressively. Open sores threatened sepsis, and, for a time, Cynthia was at death’s door. But at a small guerilla-grower’s community in Cherryfield, Maine, Cynthia was treated with fresh cannabis tea, raw honey, and aluminum sulfate. The treatment saved her life.

This was was Cynthia’s first conscious experience with cannabis as medicine; although she used cannabis therapeutically, at least in part, to treat sensory confusion and other issues, she’d never really thought about her use of the plant as medicinal. But after coming back from the brink of the grave with the aid of marijuana tea and other natural substances, Cynthia became convinced of the deep and varied medicinal properties of C. Sativa.

A few years after her healing at the guerilla-farm in Cherryfield, Cynthia began to get involved in politics again, this time focusing on issues related to food freedom and safety, as well as gun rights, cannabis laws, and other issues.

At one point, Cynthia and her husband, John Stewart, developed their property into a successful fish farm, but government agents raided the farm, destroyed years of research, and killed all of the fish after a journalist erroneously reported in an otherwise benign story that the farm was raising a banned breed of fish.

After that hard lesson, Cynthia and John’s farm changed. Stockade fencing with heavy gates was erected around the property, and bold warning signs directed at law enforcement and other trespassers reflected angrily – and justifiably – from their defensive positions on the gate and fence walls. Later, when the farm cultivated cannabis, locals knew exactly what was happening there, and most people were supportive. Cynthia and John’s activism was paying off in this regard, and even today, many Mainers will shake their head in a combination of admiration and disbelief that it was the Republicans that pushed cannabis legalization forward in the state, and not the Democrats.

In the early 2000’s, Cynthia found herself working with her husband on their licensed medical marijuana caregiver farm in Washington, Maine. Drawing on skills learned while farming fish and running a CSA, the grow operation on John and Cynthia’s property thrived, eventually attracting the attention of High Times magazine. The publication wrote a feature in 2010 titled “Don’t Tread on Us; the Tea Party Greenhouse,” that detailed the unique cannabis cultivation styles in use on the farm, as well as its strong associated political values.

By 2010, Cynthia found herself more engaged in politics than she had ever been. Although the Republican and Democratic party platforms in Maine were – at the time – similar, Cynthia felt that democratic policies too often invited government abuse of power. When democrats in the state began attacking gun rights, Cynthia became polarized and started campaigning and lobbying for Republicans on that and many other issues.

By the time Paul LePage ran for governor of Maine in the 2010 elections, Cynthia Joy Rosen was already a well-known tea party activist. She began working with LePage because at the time he was focused sharply on “Natural Rights” – ideals and policies that aligned closely with Cynthia’s personal values. LePage won the election and assumed the office of governor in 2011.

Cynthia and her cannabis-activist husband John Stewart spurred specific action from Gov. LePage to reverse former Gov. Baldacci’s heavy-handed cannabis policies that benefited the state government financially, and instead push cannabis legislation forward in the state via the LD1296 bill.  This bill subsequently passed, changing the previous legislation to be much more favorable for Maine medical marijuana caregivers and patients. This legislation and work that Cynthia and others in the industry did during the following few years helped advance Maine to the point where recreational marijuana for adults was passed in the 2016 elections.

Since then, Cynthia has taken on a more personal role with cannabis. Her primary work today focuses on helping close family members and friends learn how to heal with marijuana products like cannabis oils and tinctures.

One person who relies on Cynthia’s guidance and knowledge of cannabis is her daughter, Hannah. Hannah has stage IV Lyme Disease, contracted from a tick bite while on a trip to Pisgah National Forest. Because she didn’t respond well to several rounds of antibiotics, Hannah’s case of Lyme Disease has become debilitating, even though symptoms of the disease were caught immediately, and treatment began early. Fortunately, Hannah is able to live a somewhat normal life, thanks at least in part to her mother’s tireless efforts, and regular treatment with medical cannabis.

Cynthia’s work with cannabis has inspired the next generation – her daughter Hannah works full-time at one of the state’s best marijuana dispensaries, Herban Cannoisseur in Waldoboro, Maine.  The shop’s primary grower and owner is Noah Rosen, Cynthia’s son. This author has spent time interviewing all three, and it’s clear that this is an extremely close cannabis-oriented family. I also spoke to numerous people who work in the industry, who all strongly recommended Cynthia’s work and endorsed her heartily. Around Midcoast Maine, Cynthia’s reputation is exceptional.

Cynthia is still a cannabis activist, but now she’s much more behind-the-scenes. She’s also a driver for Uber, and, naturally, she’s a grower – cultivating beautiful and healthy cannabis plants for her and her family.

The Future for Cynthia Joy Rosen

One of Cynthia’s goals for the future is to continue to help family and community members heal using natural remedies, especially cannabis. She’s also passionate about cannabis seed preservation, and wants to work on a method of making seeds available to anyone, with no patenting or ownership rights – seeds for the public domain, essentially. While she doesn’t have much experience working with cannabis genetics and breeding, this is a subject that interests her, with a long-term goal of preserving cannabis seeds for future generations.

Do you know Cynthia Rosen? Have you worked with her in the cannabis industry in Maine? Let us know your thoughts in the comments section below!