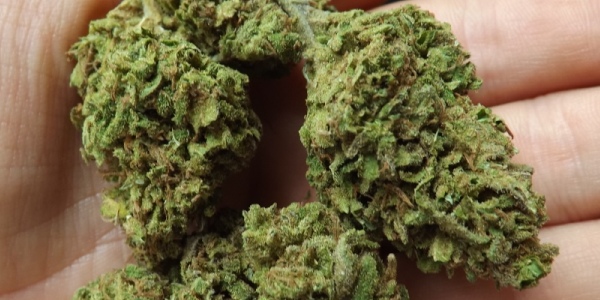 Jack Herer 3 is the darkest green cannabis that I have had since returning to the US this winter. The buds feature strikingly short trichomes, but these are so densely laid out that there isn’t a square millimeter of the weed that isn’t crystalline with resin glands.

In certain types of lighting there are some interesting purple hues in this weed, but this was not produced in the typical manner via specific purple leaves; instead, it was more of a faint organic coloring that only surfaced when held up to the sun and turned slowly from end to end. Of course, I wasn’t able to get my camera to capture any of this.

Jack Herer buds are fairly pliable at first, but with continued pressure they become quite dense. The insides of Jack Herer 3 buds are just as heavily trichomed as they are on the outside, but surprisingly the weed is not terribly sticky and makes for decent joints. However, because of the heavy crystallization, an average joint becomes twisted and hardened with heat and resin by the time it’s approximately 50% burned. In a bag or other container, Jack Herer 3 smells of citrusy diesel with molasses and honey, with an obvious hint of sage and lemon. Upon breaking the buds open the fragrance becomes somewhat woody/earthy with a strange high note of fresh mushrooms.

This weed produces dense white smoke that can elicit a mild to moderate cough. Jack Herer 3 leaves and earthy taste and sensation on the back of the tongue and on the roof of the mouth and made my sinuses tingle a little.

Overall Jack Herer 3 has an extremely mild to non-existent flavor/taste profile. There is definitely a diesel cooling type of numbness and sensation that is difficult to define. This is mainly because only the first one or two hits of this weed produce any type of flavor at all; beyond these initial hits, there just isn’t much smell, taste or flavor to speak of. After just one hit from a freshly cleaned bong I felt a mild high begin to creep down from my head, stopping just at the top of my eyebrows. This high extended from the top-center of my head to the sides, encompassing the tips of my ears. This high intensified noticeably for the next few minutes, although I certainly wouldn’t have been satisfied just from one hit.

After 2 hits the high crept its way into my eyes – partially closing them – and then started to buzz faintly in my cheek bones. I might have been satisfied by this stage if I had something important to do, but for hanging out or creative work, 2 hits of Jack Herer 3 is not enough for me. Interestingly, during the peaking period after the second hit (about 6 minutes) I began to feel the high in my ankles, knees, elbows and wrists. The feeling was extremely pleasant if not surprising; each of these joints felt cool and somewhat numb, but they tingled in a way that felt like an internal massage. This is the first cannabis strain I have used that had this effect on joints. This is excellent for me because with the amount of writing I do I have often struggled with pain and discomfort in my wrists.

After my 3rd measured hit I sort of forgot about writing the review for a few minutes and surfed the web aimlessly before coming back to my senses. By this time the high had taken over my entire head down to the base of my neck, although the body effects seem to have lessened a little.

By the 4th and final rip from my utilitarian Headway bong the high moved fully into my ears (whereas before the sensation was only in the tips) and a coolness moved into my palms and fingers. Pleasant sensations in the joints intensified. Although I felt spacey and contemplative by this point, I was still motivated and felt the urge to either play or work or something; I did not feel like sitting around despite my earlier spacing-out. Jack Herer 3 is exceptionally consistent when dosing is measured. (I only put exactly one hit in the bong each time – the same size hit every time) Each hit comes with a peaking period of around 6 minutes. I picked up and have consumed nearly an ounce of this weed, and it is one of the most consistent I have ever had.

This strain is impervious to even rigorous exercise – you’ll still be high after a good workout. However, eating will immediately and severely lessen the high, even if you consumed a great deal.

Unfortunately, the duration of the high produced by this cannabis strain is disappointing. If you get outright blasted on this weed you can only expect a high lasting about 90 minutes for veteran smokers. If you only smoke a little bit, you’ll be looking to take a couple more hits within 30 minutes or so. I’m not certain why the duration of this strain is so poor, but I can tell you that as a result of it the amount needed to achieve the desired effects is significantly more than other strains because you need to medicate so frequently. I really enjoy this strain and I especially like its highly specific therapeutic effects, but the short duration doesn’t motivate me to acquire this again if I have a better choice.

Jack Herer 3 is a “highly” unique strain that offers some inimitable medicinal benefits. Perfect for sufferers of joint pain and arthritis, this weed’s medicinal value is boosted significantly by its ease of titrating. But if you’re a recreational user looking to get twisted or a creative user needing to go deep into your mind, then this 3rd generation Jack Herer is probably not going to be your friend unless you are a novice.

Have you tried Jack Herer 3? What did you think? Let us know in the comments!