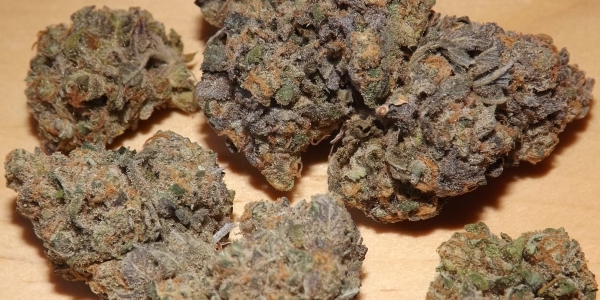 The Oregon Huckleberry marijuana strain is an indica-dominant hybrid swiftly becoming renowned for its strongly berry profile. A unique strain that blends some of the most interesting and hardest-hitting genetics, Oregon Huckleberry has become one of my favorite strains in 2015.

This Oregon Huckleberry strain review is for the Dynasty Seeds variety as cultivated and cured by New World Organics in Belfast, Maine, United States. The growers, Justin Olsen and Nancy Shaw, were giddily in love with the strain and offered me a taste of Oregon Huckleberry from their personal stash. I was so impressed that a week later I begged them to sell me a ¼ ounce so that I could share this strain with my circles.

This review was my first experience with Oregon Huckleberry. However, I was able to predict some information about it before actually trying it. My first comments to the growers centered on how much the strain looks like Shiva Shanti. Not surprisingly, this strain has strong Shiva genetics. Oregon Huckleberry is a proprietary strain developed by Dynasty Seeds. According to Dynasty Seeds, two phenotypes are common among the stabilized strain and it is this author’s opinion that the type acquired and cultivated by New World Organics is phenotype #2, which has more of a sativa influence.

The Oregon Huckleberry buds that I got from New World Organics were darkly colored – mostly deep purples but also some black. Smaller buds were slightly greener but overall this was a richly colored batch. This dark purple characteristic even extended to the stems, which is not always the case with purple-colored strains.

Upon close examination this particular batch of Oregon Huckleberry showed short but densely populated trichomes with clear to cloudy but unblemished glandular heads. The buds were cured well; firm but crumbling with increasing pressure and not at all sticky.

This strain is an excellent candidate for smoking or vaporizing cured flower, but probably won’t work well for hash making, dry sift or other processing. The Afghani is obvious in the scent profile – which smells of timothy hay and fresh earth – despite the fact that the Blueberry genes are predominant. However, the overall smell profile is fiercely blueberry; especially in the center of the buds. There are also high notes of citrus (mainly lemon) and even some vaguely spicy notes as well.

When smoked in a clean bong, the flavor is more “earthy” than blueberry, although both berry and citrus flavors come through. These berry flavors are centered on the middle of the tongue and the roof of the mouth. Interestingly, the blueberry flavor actually increases with multiple burnings.

After 2 hits of the Oregon Huckleberry strain, I generally get only mildly high. This is focused solely in my head, from the eyes up. A third hit increases the high sensation until it spreads down the back of my neck, although at this stage the high is still relatively mild. I have noticed on multiple occasions that with only 2-3 hits, the high is quite cerebral and in fact I don’t feel any body effects at all.

Pump those numbers to 4-5 big bong rips and that’s when the body effects come in. This consists of a pleasant, slightly tingly sensation that begins in my knees and crawls up the front of my thighs. However, these effects are mild.

When it comes to Oregon Huckleberry, the effects tend to be more cerebral than body-focused. Despite the heavy indica genes, the high is significantly different from what most users will expect in an indica. The cerebral high is pleasant and moderately strong without any incapacitation; expect to get high but remain fully able to function and stay motivated. The sole reason that Oregon Huckleberry didn’t achieve a 5 Star rating in this strain review is that the duration of the effects are too short. Lasting just 90 minutes or less, it’s all too easy to go through a big bag of this weed a lot sooner than you (or your budget) might expect. However, this can be a useful tool if you want to achieve a moderate high that you can safely predict will dissipate in a short amount of time.

Users of Oregon Huckleberry should be prepared to experience a consistent “peaking” period of around 7-10 minutes. This is not a strain that immediately hits hard – instead it slowly increases to a moderate level and planes off after an hour and a half.

Strenuous exercise and sex do not seem to decrease the duration of the high. Eating anything more than a light snack decreases the high by as much as 40-50%, so this author recommends eating before you use this strain, which might be difficult to plan for as Oregon Huckleberry is a moderate-to-strong appetite stimulant. Oregon Huckleberry is an indica hybrid that plays like a sativa. This isn’t a strain that I would smoke as my daily weed; instead I would smoke it occasionally as a tasty, unique and different treat, and to supplement for specific purposes like a moderate, short-duration high as mentioned earlier.

Concerning medical benefits, this strain is a good candidate for the treatment of stress, anxiety and depression. Oregon Huckleberry also offers promise to athletes who seek the advantage of an indica without the overpowering stone attributed to many indicas.

Have you ever tried Oregon Huckleberry? Ever grown this strain? What was your experience like? Let us know in the comments below!