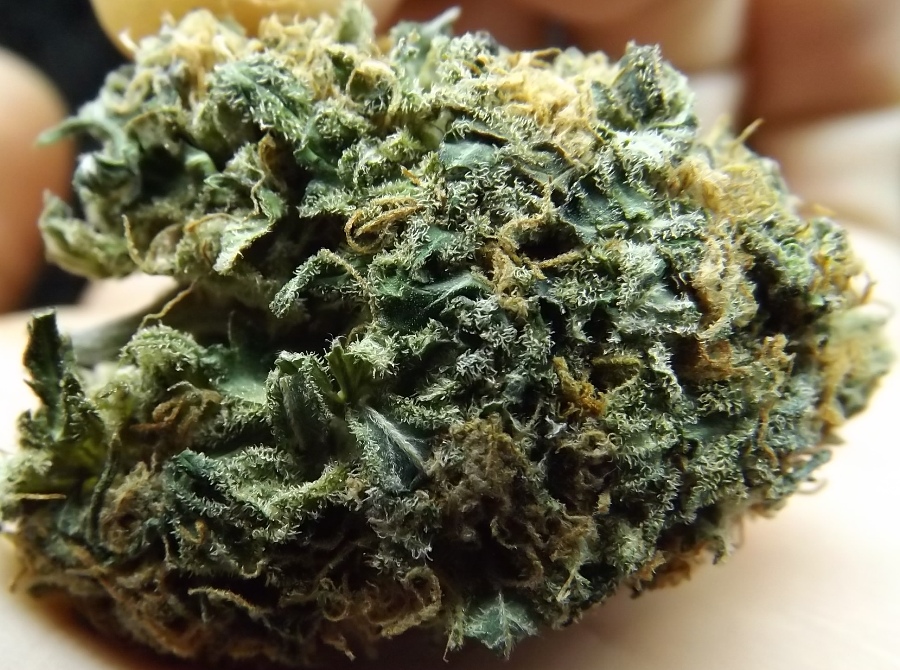 The Nuken marijuana strain is a lot like a cake that’s just too beautiful to eat. Nuken is so fantastically gorgeous to look at that you might hesitate to break it up and smoke it. In fact, of all the marijuana strains I’ve reviewed for this site so far, Nuken was the most beautiful. A deliciously appealing weed, the Nuken marijuana strain is less potent than you’d think it would be based on looks alone, making this a strong 4 Star performer that doesn’t miss the 5 Star mark by much. Of course, given the choice of a 5 Star strain over this one, I’d admire the Nuken but smoke the more potent weed.

Nuken is a 100% Cannabis Indica strain that you’d swear was a Sativa based on appearance alone. The buds have bright orange splashes on lustrous deep green. The buds are awesome; they’re big, fat, super compact and moderately sticky. If you want to “wow” someone with weed that looks like art, this is the strain to do it with.

Breaking up a small piece of a bud will yield a large pile of weed that’s too big to make sense based on the small amount required to produce a dense bowl pack or a fat joint. 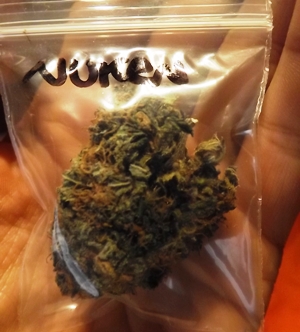 Nuken smells of sweet herbs and spices, with a predominant bouquet of mint and tea leaves, and a rather strange high note that I can only compare to barbecue chicken. It sounds unpleasantly weird but somehow it all works and manages to be mild enough that you’re not smelling this stuff from across the room; an important consideration for people who live in regions where cannabis is still persecuted.

The Nuken marijuana strain produces heavy white smoke that is mildly irritating to the upper sinuses.

Unlike most of the marijuana strains I’ve experimented with, Nuken actually tastes pretty similarly to how it smells. There’s definitely a meaty sort of flavor upon exhale, sort of like some nondescript meat that has been dredged in lemon juice and spices.

It’s actually a pretty cool flavor and I’m curious what this strain is like when vaporized. If you’ve tried this, let us know how it tastes in the comments.

Interestingly, both my girlfriend and I found that with subsequent burnings, the taste of the marijuana changed. Meaning, the first couple of hits were full of sweetness and spices, but the next few hits tasted distinctly nutty. 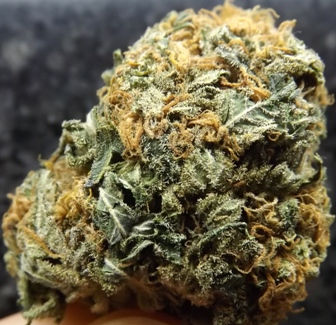 After two hits from a clean bong I felt a mild high that was focused primarily just above my eyebrows, but it also was noticeably creeping up the rest of my forehead. Though pleasant enough, I definitely would not have been satisfied with just 2 hits. In my experience this is usually an indicator of a less-than-5-Star-strain, as one of the many benefits of a true 5 Star weed is that it only takes a hit or two to get you where you want to be. Not quite so with Nuken.

After the standard full measure of 4 big bong rips I was nicely high, with nearly all of this feeling still focused above my eyebrows and running just up to the front of my head. Overall I’d say that Nuken offers a good strong high that is somewhere in the intermediate zone – you can get nice and high and still function well, but veteran smokers might not be satisfied with just a few hits. 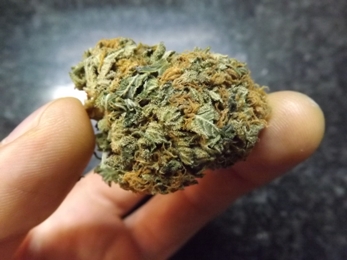 Nuken is a badass marijuana strain for a unique reason; despite eating massive meals and snacks after smoking this strain, the high is not reduced at all. I tested this a few times and the results were consistent; you can throw a major munch on this weed and stay high. That’s pretty cool and makes Nuken an efficient marijuana strain because you require less of it to maintain the level of highness you’re looking for. Conversely, other strains – even 5 Star strains – give you a bad case of the munchies, but the high is depleted when you eat, requiring you to smoke more to get back to where you were before eating.

Ultimately, the high produced by Nuken is extremely consistent and lasts for 2+ hours for experienced smokers. For occasional smokers or newcomers, I think a high lasting 4 hours or more is a reasonable expectation.

A beautiful, unique and truly interesting marijuana strain, Nuken just doesn’t have what it takes to make it to 5 Stars simply because it’s not potent enough. However, as a more moderately priced strain, this would make an excellent every day smoker, and it’s unquestionably beautiful to look at. If you get the chance to check it out you should definitely do so, as my terrible camera just didn’t do this strain justice.

Have you tried Nuken? Let us know in the comments.