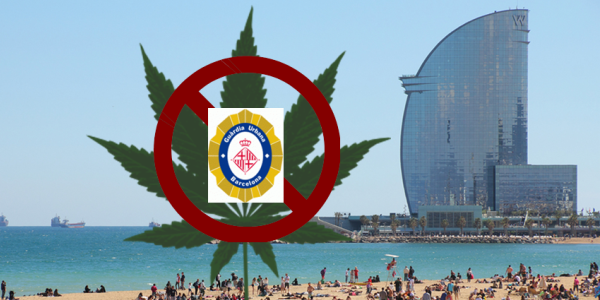 “Give us your weed.” Those were the firm words of Barcelona police officers directed at two men who had just left one of the city’s now-infamous cannabis clubs this week. The men, one of whom is a Spanish resident and legitimate member of a local club, had just acquired a small amount of marijuana from a cannabis club near Las Ramblas. As they turned the corner and headed home, two plain-clothes police detectives flashed their badges and ordered the men to:

Give us your weed.

These types of confrontations are becoming increasingly more common since Barcelona city administrators and police began waging a war on the region’s cannabis clubs at the beginning of the summer.

In June many clubs were raided, members harassed and in some cases club management were arrested and jailed.

Initially these attacks were focused on club management but are now extending to members of the clubs – even ones who are technically within their right to make use of the region’s cannabis associations.

When these two men in particular were approached by police on August 22, only the legitimate Spanish resident actually possessed any marijuana and he immediately relinquished it to the cops. The police spread the weed out on the sidewalk in full public view while questioning the men, who were returning to their flat just 150 meters from the club.

At the conclusion of the public debacle, the man carrying the marijuana was issued a citation and the police then went about their business.

Although the man was in his right to be a member of the club and to go there and acquire cannabis as part of the shared spaces, shared grow cooperative permitted under the aforementioned “Right to Association” laws and other liberal Spanish privacy laws, the law is less clear about what happens once a person leaves the establishment.

In practice when a member steps from the club onto the street they are then considered to be in public space and subject to search, seizure and arrest because cannabis is illegal everywhere except private dwellings and cooperatives. Many clubs advise their members to place cannabis in their under garments when leaving the club in order to avoid a problem with police, as according to Spanish law cops cannot search there without a warrant.

If this is the case, then the laws are indeed confusing because it’s extremely hard to argue that a person’s pants, coat pocket or shoes are “public” spaces worthy of unprovoked search and seizure. In the Netherlands, the precedent has been set that if you smoke or display marijuana in public, you could be cited and fined. But at no time is a Dutch police officer going to search a person’s pockets and cite them for a small amount of weed that was never publicly displayed.

What this means is that Barcelona is sending the message that it’s okay to possess weed in the private clubs, and it’s okay to possess it in other private places and residences. But it’s not okay to move it from one of these private places to another. And herein lies the contradiction; the clubs exist as a cooperative, meaning that not everyone has the space, skills, resources or finances to grow their own cannabis. The clubs alleviate this problem and allow a safe place for people to acquire and consume cannabis; an overwhelming majority of whom are using marijuana for medical purposes.

But under Spain’s current laws, these people cannot take their medicine home. If they do, they could end up like the man who was cited and fined around 300 Euro yesterday for doing exactly that. Fortunately, the man is a veteran international attorney who ‘fessed up to his ignorance of the law, readily relinquished the cannabis and fully cooperated with the police. Holding himself fully accountable, he told this author that;

I didn’t read the statutes when I should have; ignorance is not a defense to the law. I fucked up, and I’ll gladly pay for it. The law is the law.

The paradox in Barcelona is that the regulations regarding cannabis clubs are extremely hazy, making it difficult to obey laws that not even administrators understand. Additionally, the fact that as the men rounded the corner to go home the police immediately said “give us your weed” indicates that the undercover agents were watching the men and the club in question. This leaves one to assume that detectives knew one of them had acquired a little bit of marijuana from his club legitimately, and that the police chose to use significant resources to penalize this one upstanding Spanish resident for a small amount of pot – pot that, had he gotten to his front door with, the police would have had no right to stop him at all and he could have freely smoked a joint on his balcony.

Furthermore, since when do undercover detectives expose their identity simply to cite someone for a non-criminal offense merely because they allegedly “smelled” like marijuana? At the risk of editorializing, it appears that one of the primary smells in this case was actually that of bullshit.

Have you been stopped by Barcelona police for visiting a club or possessing marijuana?  Let us know what happened in the comments.

3 thoughts on “Barcelona Police: “Give Us Your Weed””