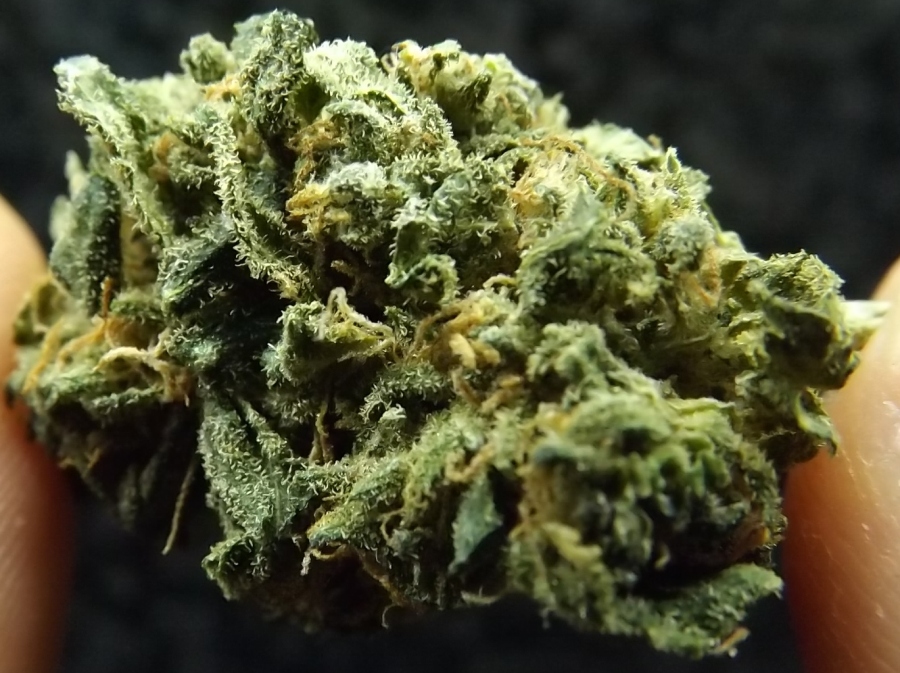 [author-post-rating]
This marijuana strain review is for the Black Mamba variety offered at the Kush Cannabis Club in Barcelona. I had never heard of the Black Mamba strain before, and as I carried a few grams of it back to the beach in Barceloneta to smoke, the folk song “Black Betty” forced its way into my head and has since refused to leave. Naturally, I switched the lyrics to: “Whoa Black Mamba, ram ba lam, whoa…” Of course, Black Mamba made it into my head in a number of other ways, as this marijuana strain review will tell you.

Black Mamba is aptly named; the buds are quite dark green in color overall, but I think to be even more aptly named it should be “Mulatto Mamba.” I’ve had weed that’s much darker than this. Of course, the given name of this strain could also be related to the Black Mamba species of poisonous snake, but ultimately I didn’t find this weed to be anywhere near as potent as the snake of the same name. Something like one drop of venom from a Black Mamba will kill multiple men, but the marijuana variety won’t even put one down for a nap. (See potency section below.)

The 2 grams that I got of Black Mamba were moderately firm but still fairly moist. The buds were a little sticky but not too much so considering their moisture content. The buds are heavily laden with orange and brown hairs and leaf sections, giving the already dark buds an interesting color offset.

Overall it was a very nice-looking 2 gram bag.

Black Mamba has a great smell in the bag but it’s very spicy in an Italian sort of way. There’s definitely a strong hint of stale hay – not sweet fresh-cut hay like a lot of marijuana; this distinctly smelled like stale hay that you would be wise not to feed your horses. However, what makes the scent of Black Mamba unique in addition to this is the distinct fragrance of oregano. If you were blindfolded and smell-tested, you might not believe it was marijuana at all. However, don’t get me wrong; though oregano and stale hay doesn’t sound like such a great bouquet to be sniffing, it is! The two scents come together nicely in this strain of pot.

The taste of Black Mamba is also unique. It has a potent scent that you can also taste as it wafts through the air and your sinuses. It’s a taste of sweet grass and cilantro that sits way up high in your nasal passage and gives just a hint of menthol or mint or something else that’s light and cool and sticks around in your nose up high by your eyes and in the very back of your throat.

I packed a huge bong of Black Mamba and shared it with my wife. We both agreed that the taste lingered and was pleasant, but unfortunately after burning the bowl-piece just twice – one hit each – the taste/flavor disappeared almost entirely despite the fact that we conduct reviews with a freshly cleaned bong. After that point further hits had a mild burnt toast type of taste which wasn’t unpleasant but was quite different than the initial taste. The Black Mamba marijuana strain is, in my opinion, of mid-grade potency but is still immensely enjoyable. Interestingly, the high is unique. After 2-3 hits from the bong I started to feel only a mild high, but it was situated primarily from my ears to the back of my head. Weird. After 4 big bong rips the high moved into the “mask” zone and I could feel it in my eyes and face. It wasn’t a very strong high and at first I was disappointed.

But after the 4th hit Black Mamba began to creep up on me, the bitch! I wouldn’t exactly call it a creeper, but it does have that effect. Therefore, if at first you’re not happy with the high you got from a single bowl or joint, then just give it a few minutes; you’ll continue to peak for at least 10 minutes after the last hit.

The high from Black Mamba was – for me – all in the head. My body still wanted to slam coffee and run a marathon, so this makes an excellent high for wake and bakes, or for a moderate and functional high when you want your head to be adjusted but still be able to function like a champ. The duration of the high from Black Mamba is pretty standard for me. 3 hours is a good average if you’re not killing the buzz by eating a ton, working out or doing something else to reduce the high. The most intense part of the high comes within 20 minutes of smoking it and begins to decline in less than an hour. However, it’s pretty easy to “bump up” and stay high by taking maybe a hit or two every hour in order to maintain the experience.

It’s a good, useful and pleasant enough strain and should make most people very happy. However, I didn’t get excited over it. It’s not one of those types of weed that you get all choked up just looking at, and it’s certainly not one that’ll knock you out for the count. But it is a tasty, interesting and unique type of cannabis that gets the job done. Ultimately, I enjoyed reviewing this strain but unless there wasn’t much else available I probably wouldn’t get it again; there are plenty of much stronger and even more interesting varieties out there, and if you subscribe to my RSS feed you’ll get updated on the next strain that I intend to review; Cranberry Kush. Yum!