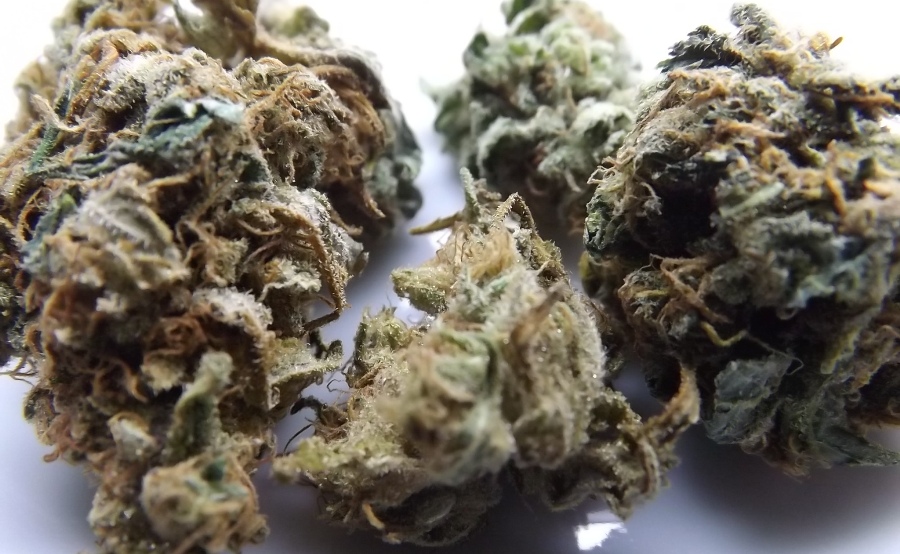 Jacky White has firm and sticky buds; you can press one with your finger and pick it up by adhesive power alone. Of course, it’s not fresh so it only “sticks around” for a second or two. But in any case, one thing I notice about marijuana grown for commercial purposes is that it loses a lot of its resin glands due to over-processing, handling, packaging, exposure to light, etc. So the weed you get at coffeeshops in Amsterdam or private cannabis clubs in Barcelona isn’t nearly as fresh and icky-sticky-ooey-gooey as the weed that I normally get in, say, Vermont, USA.

But Jacky White is pretty fresh overall, and I knew when I acquired a couple of grams of this strain from Abcda that it was going to be The coloration of Jacky white is a mid-hue green with lots of orange. It’s quite attractive for processed buds. And unlike a lot of strains I’ve been reviewing lately, this bag had some good sized-buds in it, which is always nice and makes for better photographs.

Jacky White smells like the grass stuck underneath the mowing deck of a push or riding mower that has been put away for a couple of weeks in a dark, damp place. It’s a smell of sweet, fresh cut grass that has an unmistakable note of something fermented. It’s not unpleasant but I realize my description probably sounds like it’s not so great. On the contrary, I enjoy it and it’s one of those scents that tell an experienced toker that what they’ve got their nose in is good weed. It’s that sort of smell that gets you all excited and rushing to get one of those little buds into a clean bowlpiece.

I wanted to wait until I got home from the club to try Jacky White out, but I was like a young kid getting laid and I couldn’t keep my pants on long enough. I sat down and chatted with some guys at the club while I puffed on Mrs. White, and I got very, very high. So did the guys I was hanging out with; one to the point of the giggles.

You know when a grown man gets the giggles that he’s high. I was extremely high myself and eventually had to break away from the group and go chill. I was too high and out of my environment so I didn’t do a proper review. I went home, waited a couple of days, and then coaxed Jacky out with my pen and camera ready to go.

When it comes to taste, Jacky isn’t that remarkable. She’s a little harsh and will give you a cough if you’re taking a big bong rip. There’s a bit of a mix of hard-to-define sweet and sour flavors that sit up on the roof of your mouth and hang out there long after you exhale. Despite this, the taste is subtle.

One of the shining attributes of Jacky White that I appreciate most is that the flavor and bouquet do not subside after subsequent hits from one bowl pack. Some weed you can only get one or two nice hits before the taste disappears or turns to burnt toast, but Jacky White tastes lovely to the end.

I think this marijuana strain review has already established that Jacky is a rugged lass; she’s a potent, give-you-a-permagrin kinda gal. After just 2 bong hits the high moved into my forehead and I could feel it growing. There was a distinct physical sensation of the high actually rippling its way to a peak that resided somewhere in the top of my head.

This high is deliciously fast-acting; at first it nearly closed my eyes, then it became so strong it pulled my brow down into what felt like a vicious frown; even though I wasn’t frowning at all. At just 2 hits I was satisfied and really didn’t need any more. But being that I review all strains with the same measure; 4 big healthy rips from a freshly cleaned bong, I had to soldier on.

By the third hit the high moved to the top and back of my head. I was thoroughly stoned, and by the 4th and final hit I began to wonder if this strain was as strong as Amnesia. If not it’s very close.

Overall the high is damn potent. In fact, for beginners this might even have some psychedelic effects.

Jacky White is a badass. If you don’t stuff your face with all kinds of snacks, you can get at least 3 hours of a fairly stupefying high thanks to Jacky White. If you smoke more than 4 hits or are inexperienced, I think 6 hours is perfectly reasonable.

It’s hard to find bud that offers a sustained high to regular smokers. A couple of hours or less is what most weed provides for me, but Jacky Keeps me pleasantly adjusted for twice as long or more. This makes it a great long-outing weed; smoke before you leave and you’ll be stoned for most of the trip and won’t have to carry anything with you.

There’s a new woman in my house, and her name is Jacky White. She’s right up there with Amnesia and NYC Diesel, in my opinion, and I think it would be interesting to do a smackdown between these three varieties to see if a winner is even possible. There’s no question that Jacky is 5-star high grade premium marijuana. This is a very fine cannabis strain.

Of course, I’m always in search of more 5 Star strains. Next week I’ll be reviewing a new private cannabis club and several new varieties of marijuana. To get updated automatically on those posts when they are published, click the RSS icon below or in the upper right of the site.