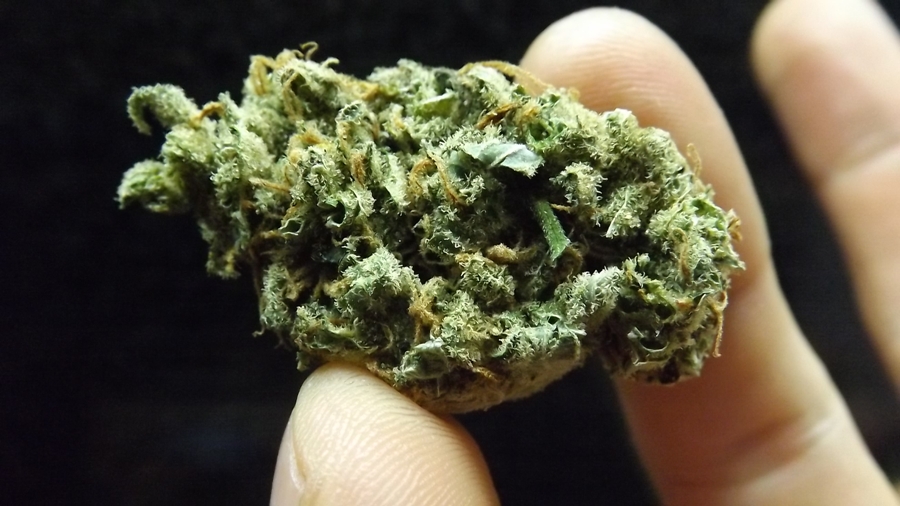 This Marijuana Strain Review Smackdown is between NYC Diesel, Amnesia and Sage ‘N Sour strains. I got these from the private cannabis club Betty Boop on Maria Cubi in Barcelona. The Sage ‘N Sour, which is an Indica, was recommended strongly by the dispensario, Agro. I got a couple of grams just to check it out, but I was pretty excited about the Diesel and the Amnesia. I mean, who wouldn’t be, right?

The 2 grams of Sage ‘N Sour I bought was mottled with a lot of dark green and some lighter green, but there were almost no colored

hairs present. I buried my nose in it and it didn’t smell that great – there was a hint of cow manure there and possibly even a little mold but perhaps it was my imagination. I couldn’t visibly see any mold but that musty scent was in there somewhere.

This led me to wonder if coffeeshops, cannabis clubs and other “legal” weed dispensaries push product that has turned or is about to turn bad or wasn’t produced properly, much like restaurants put the salmon on special the day before they’d normally have to throw it out. Of course, that probably wasn’t the case here but I have wondered this before when I’ve had strong recommendations for weed that turned out to be mediocre or even lame.

Ultimately I rank Sage N’ Sour as mediocre mid-grade bud. It even tastes a little fermented and produced a very mild, unremarkable high. Of course, it’s an Indica so I’m naturally inclined to report a substandard high experience; for whatever reason, Indicas just don’t do it for me, although I continue to try them.

I’ve had NYC Diesel a number of times; an old friend of mine in Maine would often score this bud for me and it was always a stinky pleasure. I had also tried it in Amsterdam and was impressed, so I was really looking forward to checking out Barcelona’s version.

Turns out, the NYC Diesel strain here is the best I’ve ever had.

I don’t remember thinking this about the Diesel I had in the U.S. and in the Netherlands, but when I opened this bag of 2 grams up, I was blown away by the scent. This might sound like the most obvious assessment, but it smells a lot like gasoline and I assumed this is where the name of the strain comes from. Interestingly enough, it was Barcelona’s NYC Diesel and not New England’s or the Netherlands that gave me this impression.

So right away I’d say that the Diesel here has a much more potent bouquet in the bag. But when smoked, this bouquet becomes something much different; it’s a long-lasting, sweet grass, cilantro-wintergreen lemony sage type of flavor and it’s delicious! What’s more is that it lingers for a long time; you roll the scent and taste around in your mouth for a few minutes after exhaling.

The smoke is a little harsh but didn’t produce much coughing after the standard 4 big rips from a freshly prepared water bong.

NYC Diesel never disappoints. The high isn’t much to write home about at first, but then it creeps up on you. A lot of weed you smoke and you reach the plateau of the high shortly after setting your piece down, but Diesel seems to reach its peak about 20-25 minutes after the last hit. Therefore, you should be careful if you smoke before you do anything of importance. Thinking that you’re not very high immediately after a couple of hits and subsequently taking a couple more might leave you rather incapacitated when both sets kick in.

NYC Diesel is a favorite, but it didn’t take the cake.

Amnesia is a powerful strain that solidly beat out the Sage ‘N Sour and the NYC Diesel for one primary reason: this shit fucks you up. I mean, if you’re looking to get some weed that just rocks your world to the point that there’s not much left to talk about, then this is it. I wouldn’t say it’ll mess you up to the point of developing clinical amnesia, but overall this is an aptly named strain. Don’t plan on smoking this herb and having complex, multi-faceted and lucid conversations though – I found myself stopping mid-sentence a number of times while smoking this bud with no idea whatsoever where I was going with what I was saying.

I shared this strain with two other people and they both had some trouble remembering where they were going with their dialogue or forgetting what the point of the sentence was altogether. It was funny but not so much for the patron of Betty Boop that I interviewed. Bonnie was slightly embarrassed on at least a couple of occasions when she had important points to make but got lost before she could get to them.

It was comical enough and happened to the interviewer a couple times as well. 😉

Amnesia is a unique strain. It has a moderate aroma that clearly tells you it’s potent stuff without being overwhelming. I’d certainly rather carry this in public than the NYC Diesel, which absolutely reeks even from a distance. (ARRGGH! Noo oooo! Now I have a Bette Midler song stuck in my head. ;-( Time to hit the Amnesia again!)

One of the most interesting things I found about Amnesia is that it has almost no taste whatsoever upon exhale. I’ve had Amnesia from a couple of different coffeeshops in Amsterdam and it never made any mark on me, so once again Barcelona’s variety was impressive. Unfortunately, the moderate scent and tasteless flavor were deceiving; this stuff will make you cough until your sides hurt, so be careful with your bong rips.

Ultimately, the high from Amnesia is what sets it apart from other strains; it’s fast, hard hitting and extremely powerful. Thankfully, it’s also a rather energetic high and will probably make you feel like you want to go for a hike rather than sit around on the couch.

The big winner in this Marijuana Strain Review is Amnesia. Of course, these are just my opinions and marijuana affects everyone differently so don’t get your panties in a bunch if my experience isn’t like yours.

My next Marijuana Strain Review is going to be crazy; 3 varieties that I’ve never had before; and one that I had never heard of. Bookmark this blog or click the RSS icon in the upper right to subscribe and automatically get that post when it comes out.