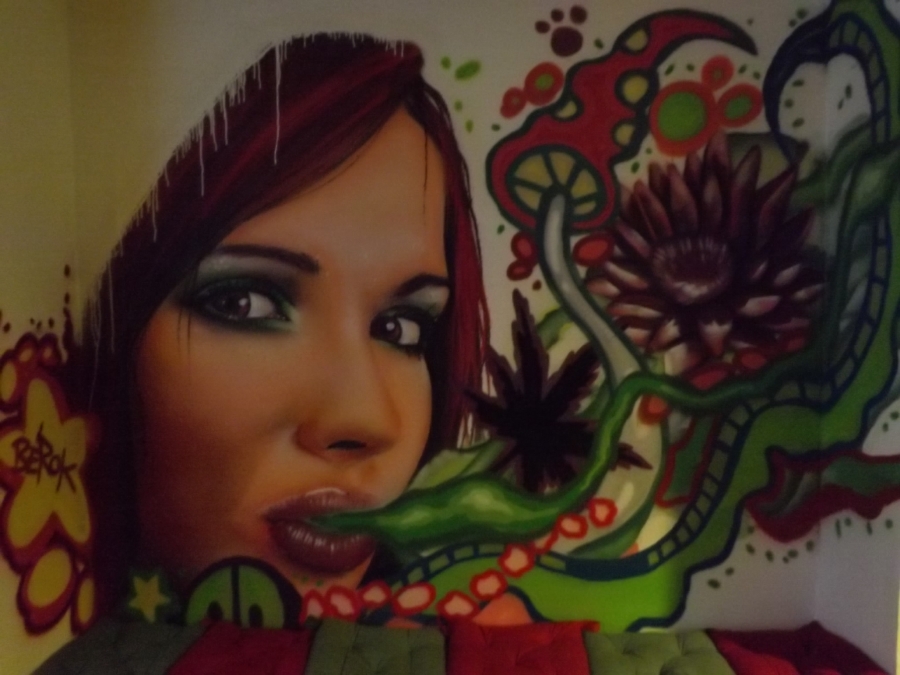 The Smoke Green Cannabis Club on Carrer de Girona in Barcelona is a private smoking club that I’ll never forget, thanks to a cannabis “tasting” where I discovered an amazing new strain. Smoke Green provides ample space for members to spread out and chill, but more importantly, it’s obvious that they take cannabis seriously. As this review will testify, Smoke Green grows some of the best marijuana I’ve had since being here.

The Story Behind the Review An associate who owns a small local weed-related website connected me to the Smoke Green cannabis club after the site’s president invited me to attend a weed sampling that was taking place there. He said that the event was to be a lot like a wine tasting and explained that we would try different strains of some new marijuana grown by the club, and that snacks would be provided. I didn’t need any convincing; this sounded like a good time.

I invited my friend, “E” to come along. E was just coming off a recent stint of lengthy travel to some frightening places that I can’t mention in order to protect her identity. She decided to chill in Barcelona for a bit and check out the cannabis club scene.

We arrived ahead of our host (the myth of Spanish lateness is no myth!) and waited in the reception area, which was modern and clean although a little cramped when more than a few people were in the room at the same time. Our host arrived and as usual was chatty and knew many of the people there.

We filled out the paperwork and walked through the heavily-muralled main lounge, into a bar area and finally to the dispensary, which was guarded by a giant green mannequin. Once inside we each contributed just 5 Euro, and in return we received three white cups with at least a gram of dank weed in the bottom of each. The cups were marked C1, C2, and C3. With this we also received a half sheet of paper with 3 descriptive columns for each type of weed. The upstairs area had quite a few people, so our host took us to the downstairs lounges where we spread out our weed and charts on a coffee table.

The general idea of this sampling was that we would smoke some of each strain, then rate it according to various categories of information that Smoke Green was looking to learn. Some of the information requested was our opinion of the smell of each strain, our assessment of its dryness, and of course assessments of potency. Finally, the form asked us which strain we liked best.

E and I looked at each other quizzically;

“How are we supposed to judge three strains at the same time?”

She said exactly what I was thinking. After all, each strain was clearly premium marijuana, so no doubt we’d be high after the first strain. How could we then fairly or accurately judge two more strains? Surely by the third strain we’d already be wasted and have no true way of assessing which strain was responsible for which portion of the overall high we felt?

We started with the type marked C2 and weren’t that impressed. There wasn’t exactly anything wrong with this strain, it was just unremarkable. However, the strain marked C1 brought smiles to brighten our reddening eyes. C1 was some of the best-tasting marijuana I have ever had in my life. It was a rich and lemony taste that was fresh and potent at the same time. We knew right away that this weed would certainly be the best of the three, and by the time we got around to smoking C3, it was clear that we were right despite the fact that several bongs and a couple of vaporizers of weed had proven to be the undoing of our objectivity.

The three of us were ripped.

After that point we struggled to fill in as much information as possible for the charts while tearing into a colossal bag of gummy candies that my associate had brought along. Wickedly high, E and I thanked our host after completing the form and headed back upstairs to the dispensary. Apparently, Smoke Green was offering the strains we had just tried at a special share amount, and both of us wanted to get some for later.

It turns out that the marijuana strain in cups marked C1 was no other than the legendary Cinderella 99; a strain I had heard of but never been able to obtain in my travels. Interestingly, during the sampling I was confident that the strain was actually Black Lemon, as they look, smell, taste and smoke quite similarly. However, I think “Cindy,” as Cinderella 99 is sometimes called, is a little bit more potent and has a much more citrusy profile.

Anyway, E and I acquired 3 grams each of Cinderella 99 and hit the streets of Barcelona. But as I do with all reviews, I came back to the club a few more times on my own to gather notes and photographs. Smoke Green reminded me a lot of my time in the U.S. Navy. The primary lounge is functional more than tasteful; basic furniture allows probably 25 people to gather and watch a large projection screen focused on the far wall. The wall to the North is decorated with some trippy but slightly garish hippie-art, and the South wall has numerous shelves and bookcases where literature, smoking equipment, awards and other items are tastefully displayed. Like many cannabis clubs in Barcelona, Smoke Green has low lighting so it’s extremely difficult to get good photographs, but you should get the idea with what I’ve included here.

The main lounge empties into the bar and dispensary, which are both to the right in the next room. I didn’t check the bar out much but it seems sufficient and is stocked with everything a stoner should need.

At the South end of the bar area is the stairwell that leads to the basement, where 3 more lounge areas can be found. One has comfy but somewhat dingy seating for 5 along with a gaming system and large flat screen TV mounted on the wall, while the room behind it is populated solely by a large ping pong table. The third room is off to the back of the basement and is lit with a green light. It’s a little dingy in there too but very private. Smoke Green has an amazing marijuana selection that is larger than most other clubs, and also offers unique strains that I haven’t seen elsewhere. This of course included the Cinderella 99 strain, but it was also the first place I was ever able to acquire the MK Ultra strain. Though the menu changes, Smoke Green offers about 12-14 different strains, as well as some hash and extracts.

The dispensary also has a little dish full of cookies. (Actually, last time I was there it was muffins with cannacream frosting.) During the sampling I purchased the only cookie they had available at the time. Although it was large, it was so stale I could barely break it in half to share with E. The half that I ate did nothing for me, but I don’t seem to get high from edibles so that doesn’t surprise me and shouldn’t be regarded as a statement of the potency of cookies offered at the club.

The cannabis menu at Smoke Green changes regularly, with some staple strains remaining consistent on the chalk board. Smoke Green has some pretty cool events & extras, and the weed strain sampling is an excellent example of this. You can also get involved with game nights and tournaments, watch important soccer matches with some of the world’s most diehard fans, and try your hand at beating some pretty tough competitors in ping pong. The club also offers other special events from time to time, so be sure to check in regularly if you become a member.

At the bar you can find a delicious selection of fresh fruit smoothies, coffee, tea and sodas, as well as some other small snack items. There’s plenty of space to nurse your smoothie somewhere and relax while using the club’s WiFi or game consoles. The staff at the Smoke Green cannabis club is pretty cool. The people at the front desk are polite, efficient, and exceptionally welcoming. At the dispensary you’ll find a happy guy who seems to relish every opportunity he gets to educate and share the club’s weed with members.

As I mentioned before, Smoke Green takes marijuana seriously, and believe it or not, you won’t find that at every club. There are plenty of clubs that just don’t give a shit and are only trying to find a way to make a buck (I have no idea what the slang term for Euro is), but Smoke Green isn’t like that at all. They care about weed and they love sharing it.

How cool is that?

Smoke Green is a 4 Star Barcelona cannabis club that I’ll be going back to regularly. The only real problem that I had with this club is that it’s dingy. The furniture and floors, etc. are all slightly dirty or stained and the chairs, tables, sofas and some other items are just plain cheap. Obviously, not every association that is truly non-profit can afford nice furniture, but it can’t be helped that the dinginess detracts from the overall charm of the club. Of course, every time I’ve been to this club it’s been a sausage fest, and I know from experience how hard it can be to preserve the cleanliness of anything when you have 80-100 guys a day or more trafficking through an area.

So I probably wouldn’t take a business associate or a date to Smoke Green – Abcda or Sweet Dreams would be much better for such company. But to chill with friends, smoke some dank nugs and be pleasantly entertained? Smoke Green is perfect for this. All it needs is some new furnishings and a scrubbing, and Barcelona will have another 5 Star club. Until then, 4 Stars is quite respectable and I’d like to thank my host, SmokingMap.org, for introducing me to Smoke Green.