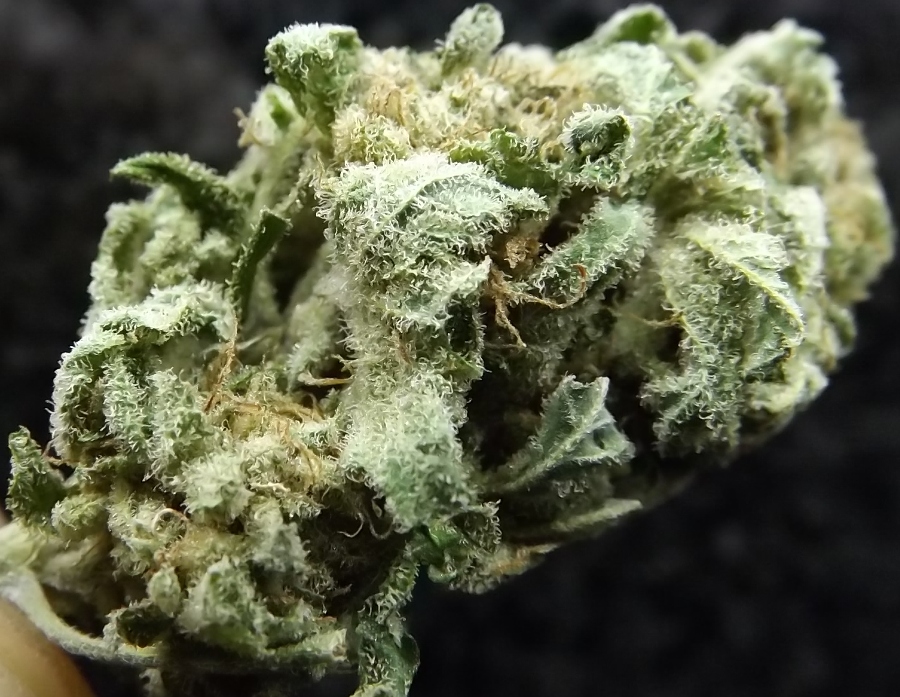 [author-post-rating]
The Black Jack marijuana strain is a 50/50 blend of Cannabis Sativa and Cannabis Indica. Normally I try to avoid C. Sativa unless it’s free or just plain stupefyingly potent, but I’ve been trying different combinations of blends for the sake of experimentation. So far, this 50/50 is the best use of Sativa that I’ve found, making Black Jack a unique and sufficiently powerful marijuana strain to warrant regular use by just about anyone. Except me, of course, because I’m a Weed Snob and prefer to only smoke 5 Star strains. The Black Jack marijuana strain is richly colored with different shades of healthy green. There are a few orange, brown and even some yellow hairs here and there, but overall this strain is pretty green.

Black Jack buds are partly dense and partly brittle; the buds are inconsistent in that one end may be nicely formed but then taper down to a weak section. Despite this the buds are stickier than most that I’ve found in Barcelona.

Black Jack has a remarkable aroma with clear notes of lavender, lemon and sage. While most high-grade cannabis strains invariably possess a high note of ammonia, Black Jack’s high note is something similar to Dr. Bronner’s Pure Castile soap.

Weirdly enough, the fragrant nature of Black Jack does not translate to a similar taste or flavor. In fact, this pot strain is shockingly tasteless. It does leave a bit of a stale aftertaste in your mouth, but this is more of a sensation than a flavor. Black Jack produces very thick white smoke without resulting in a massive coughing fit. The concentration of this smoke is reduced as the outer layers of it burn off, which tells me that the strain might have been dried out a little too soon.

After 2 hits from a clean bong I didn’t notice much of a high. On my initial review of any particular marijuana strain I always pause for 3-5 minutes after 2 hits to see if that dosage is sufficient and to take notice of where in my body the high begins. Normally even weak strains produce at least some minor or early stage high, but by 2 hits I felt nothing.

At the third hit I began to feel a mild high on the very top of my head, and there was a distinct sensation that my energy levels had increased. By 4 hits I was happily high, with all of it situated above the neck. I felt exceptionally energetic and was able to crank out a ton of work while on this strain, and ran 5-6 miles a couple of times over the few days that I smoked it. I felt great! Black Jack isn’t as potent as strains like Yumboldt, Amnesia or NYC Diesel, but it does have a consistent high, which may be more valuable to some people than a powerful one. Experienced smokers can expect to easily get 2 hours out of Black Jack, and the high will remain consistent after the initial peaking period that lasts for about 5-8 minutes.

Exercise doesn’t seem to reduce the high by much, but eating will quickly degrade it; especially icy cold foods or beverages.

Black Jack provides a sufficient and notably energetic high, presumably because of its high concentration of Sativa. This is an excellent strain for people who seek an active high that allows them to function at full capacity. Unfortunately, the Sativa content reduces the potency of the type of high that I prefer, so my overall rating for this strain is 4 stars. I’d be very interested in trying this strain at 65/35 Indica/Sativa because I think that just might be the ultimate combination for a high that kicks your ass while still allowing you to kick ass.