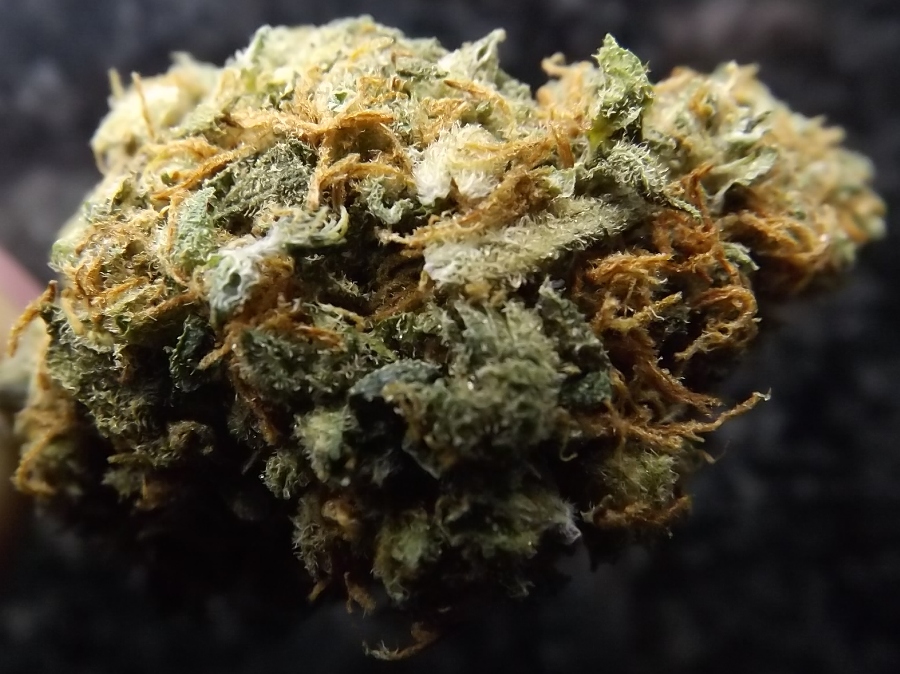 [author-post-rating]
Yumboldt is a potent marijuana strain that has quickly become one of my all-time favorites. I’m not the only one who holds this strain in high regard either – at the cannabis clubs I go to, any time Yumboldt is mentioned people start smiling. In fact, Yumboldt is so good I had to try three times in order to write this review: the first two times I smoked all of it and forgot to take notes or pictures. So here we are; ‘three times a charm,’ and with this marijuana strain I don’t mind at all! If I didn’t know better, I would have thought Yumboldt was a Sativa. It looks like a Sativa with its darker green buds and dense sections of orange. But the Yumboldt strain is actually 100% Indica, and when you smoke it, you’re going to know it. More on that below.

Yumboldt buds are moderately large compared to most of the weed in Barcelona. Most private cannabis clubs store their weed in glass jars and the buds end up getting pretty small. So seeing large buds is nice, and Yumboldt has the biggest that I’ve seen so far in Spain.

The buds are dense despite their size and fluffy appearance. Each break breaks up into a surprising amount of useable weed with almost no stems. Yumboldt is mildly sticky and has more moisture content than a lot of other commercial weed that circulates in Cataluña, which makes for a nice smoking experience. This strain has a fairly unique bouquet that unfortunately can only be likened to ammonia. It’s not unpleasant, it’s just…strong. Yumboldt buds also have a high note that is fruity but difficult to trace to any particular fruit. This scent is especially noticeable because it is sweet, which means that it is offset by the scent of ammonia quite nicely. Yumboldt is one of those strains that at first might wrinkle your nose over, but after a few more whiffs you find yourself liking it.

Yumboldt has a mild taste that is nutty and leaves a “fresh,” almost tingly feeling on the back of the tongue. There is a definite hint of almond upon exhale, but this quickly disappears with subsequent hits. I haven’t tried Yumboldt in a vaporizer, but I think it would be fantastic and strongly recommend you try this if you can.

After 2 hits of Yumboldt I was high enough that I forgot to take the following two hits and finish the review for some time. And as I mentioned earlier in this review, I had to go to the club on three separate occasions to pick up this strain because I didn’t get a review done the first two times. This is potent weed.

Yumboldt might make you a little sleepy, but the high is primarily “top-heavy.” It made my eyes swollen and heavy. After the standard measure of 4 bong rips, I was baked. Two hits of this pot is plenty, but if you’re looking for a strain that will increasingly get you high hit after hit, Yumboldt is an excellent choice. I couldn’t really find a plateau with this strain, which for me is rare. Usually I can only get so high once I reach a certain point, after which subsequent hits don’t make much difference. But not with Yumboldt.

Yumboldt is good for 3 hours for an experienced smoker. The high peaks after about 20 minutes and remains strong for 2 hours even if you eat a lot. During the third hour you’re still surprisingly high, and it only takes a puff here and there to keep the high going.

Inexperienced tokers or people who haven’t been smoking much lately can expect Yumboldt to seriously fuck them up. Be pleasantly warned.

Yumboldt is a 5 Star marijuana strain that rivals challengers like NYC Diesel, Jacky White, and even Amnesia. It’s not as pretty as those strains and it doesn’t have their rich bouquets, but its potency is comparable and the high is long-lasting. There are hundreds of cannabis clubs in Barcelona and dozens of marijuana strains are at my fingertips at any moment, yet I’ve picked up Yumboldt three times in the last couple of weeks. That’s a strong endorsement for a weed snob like me.