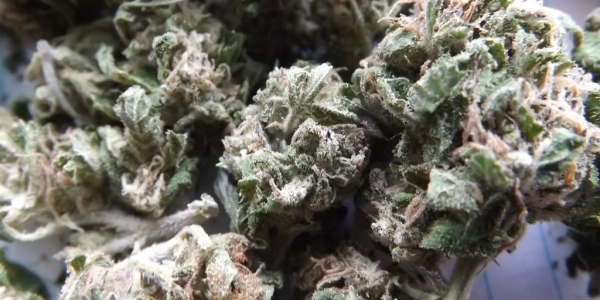 The Girl Scout Cookies marijuana strain is a hybrid based primarily on an unknown strain crossed with Durban Poison and Kush. I acquired some Girl Scout Cookies from my connection in the Northeast, but I happen to know that he has it shipped in every week from California. So it’s possible that the GSC I’m smoking is the real deal. A 5 star cannabis strain, Girl Scout Cookies gets me super high for long periods of time, but it isn’t much to write about in the way of taste, aroma or even appearance. We’ll call it an entry level 5 star strain.

On two separate occasions I acquired 1/4 ounce bags of GSC. Each contained medium sized mostly green buds with some sections of dark green and only sparsely strewn with light orange hairs.

The buds were unique in that they were inconsistently crystallized. Some parts of the buds were heavily crystallized, while other sections appeared to have few or no trichromes at all. The buds were compact and compressed to about 50% of their original size under firm pressure, but interestingly they were not at all sticky; upon releasing a bud it would not stick to your finger even after a tight squeeze.

I get the impression that the GSC I acquired was cured in a rush. It smelled mostly of sweet grass or timothy hay, but there was also a hint of damp earth and diesel fuel in there too. When I really buried my nose right in the buds I could also detect a vague hint of mint.

When smoked Girl Scout Cookies produced thick smoke that was rather tasteless and smooth. Although it didn’t have much “flavor,” it did leave a sensation on the roof of my mouth that was lemon/mint and oatmeal, but it was only a fleeting sensation.

After 2 hits from a clean bong I felt the high start in the top of my head and rapidly spread down into my forehead. My eyelids closed to about half-mast and although I was sufficiently high I still felt like I wanted to be active and motivated. The high increased for more than 5 minutes after the second hit, extending into the skin of my shoulders, arms and the backs of my legs. This effect was extremely interesting because I had never felt this with another strain before. Usually with other strains you “feel” the effects in the tissues and muscles of your limbs, but with this strain the high was situated exclusively in the skin.

I let it ride after the second hit and eventually began to feel sleepy.

After 3 hits my eyelids closed even more and the high moved into my face, cheeks, and upper chest – but once again only in the skin. I began to feel much sleepier at this stage.

After my standard measure for strain reviews of 4 hits from a clean bong, the intensity of the high in my legs increased and spread to my feet in a sort of pulsating massage. It was weird but also quite pleasant.

Interestingly, even though I had felt tired from hits 1-3, by the 4th hit that wore off and I began to feel active. It seemed like I had reached some sort of “next level” with the Girl Scout Cookies where I had passed the tired stage and entered into a “higher” state that almost seemed a little like I had eaten a diluted edible. The high from Girl Scout Cookies will last for about 3 hours for a veteran cannabis user, and much longer for a novice – at least 5 hours. I ate a huge bowl of frigid ice cream about an hour into the high and it lessened it significantly, but only for a short time. Ten minutes after eating the ice cream I was just as high as I had been before. I also spent around 90 minutes or longer sanding an oak floor by hand, and stayed nice and high the entire time.

So eating food – even ice-cold foods, and hard work do not significantly reduce the high from this strain. That’s great news for people who like to be really high, but also really active. This strain will make an excellent candidate for certain medical uses, most notably as a sleep aid at lower doses, and for treatment of various types of skin pain, possibly including neuropathic pain. It doesn’t smell or taste like much, so if you’re a weed connoisseur this might not be the strain for you. But if you’re looking for a strong, utilitarian 5 star marijuana strain, Girl Scout Cookies might be the perfect strain for you.

To learn more about the Girl Scout Cookies strain, where it comes from and who developed it, you should check out this article by Chris Simunek from High Times Magazine: http://www.hightimes.com/read/inside-girl-scout-cookies