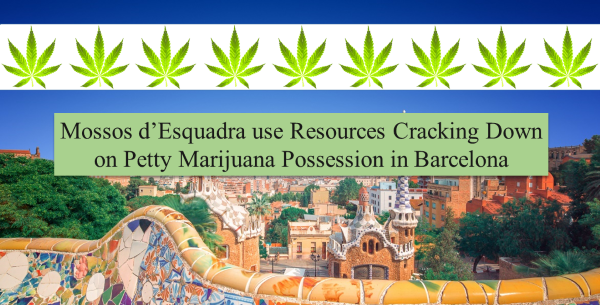 Police in Barcelona may be conducting a renewed crackdown on the city’s many marijuana enthusiasts. While cannabis in Spain and particularly in Catalonia is legal to varying degrees, possession or consumption of any amount of weed in public is grounds for searches, seizures, fines, harassment and even arrest. In the last week this author has received numerous reports of Barcelona’s police or “Mossos d’Esquadra” targeting people for petty marijuana possession charges. This article discusses two of those cases where details were available, and in both instances the amount of cannabis in question was less than 2 grams. Additionally, in each case the marijuana was acquired legally in a professional private cannabis club.

During the early part of the week of November 9th, 2015 a woman was shopping at one of Barcelona’s many Decathalon sporting goods stores. As she exited the store a merchandise alarm went off at the door. Confused, the woman stepped back into the store where she was questioned and searched by security officers.

Although the woman’s purse did not yield any stolen articles, it did yield a small amount of marijuana; around a gram and a half. When security officials found the weed, they immediately called the police. Shortly afterward uniformed patrol officers arrived and again questioned and searched the woman. They issued her a ticket or “summons” to court for the charge of marijuana possession. During questioning the woman revealed to the officers that she had acquired the weed from a local Barcelona Cannabis Club that she is a member of, although she indicated that the police did not seem interested in this information.

A Barcelona resident was walking home on the evening of Friday November 13th 2015. Near his building he was stopped by a friendly stranger, who asked him if he had a weed grinder. Feeling generous and not sensing any danger, the man took the stranger into the lobby of his building and began fishing around in his backpack to produce the grinder. (The man detailed this event in the comments on the following post: http://marijuanagames.org/barcelona-police-give-us-your-weed/)

Meanwhile, another stranger approached the door to the building and rang the bell. Thinking it was just one of the building’s residents, the man stopped fishing for the grinder and reached over to open the door. As soon as the door was open, the stranger outside flashed a badge and identified himself as a police officer. The officer was immediately followed into the lobby by three uniformed Mossos d’Esquadra.

The police questioned and searched the man. After finding less than 2 grams of marijuana and the grinder in the man’s backpack, the police picked up a roach from the floor of the building and insinuated that it too belonged to the man, who denied this.

From start to finish the encounter only lasted a few minutes. The police seized the man’s marijuana and left without much fanfare, although it’s not clear at this time if the man was ticketed or not. Interestingly enough, when the police made their exit, they left the justifiably shaken man inside the lobby with the informant who had originally duped the man into being generous enough to lend a stranger his grinder.

This man also obtained his cannabis at a local private cannabis club that he is a member of.

What are the Laws Regarding Marijuana in Barcelona?

Marijuana is legal in Spain, as long as it is only small amounts for personal use, and as long as its use, production and consumption occurs in private locations only. This means that for most people, it is only legal to possess and use cannabis in Spain in the privacy of their own home, or in a private cannabis social club or association. Even transporting marijuana from one of these locations to another is not safe; once a person is on public property such as a road or sidewalk, they are subject to search and seizure.

So, to summarize; marijuana laws in Spain allow you to grow and consume cannabis on private property only, and you must do so out of view of the public. You must also ensure that the smoke from your joints, bongs or pipes does not escape your private residence or club and bother anyone; once your smoke leaves an agreeable private place, it is considered “public” and therefore illegal. This means that if you are smoking on the balcony of your flat in Barcelona and a neighbor asks you to stop, you should comply. If they call the police – and they often do – you will be in violation of the law.

For people who acquire their marijuana from private cannabis clubs, it is important to remember two things;

What to do if you are caught with Marijuana in Barcelona

If you are caught with marijuana in Barcelona (or anywhere in Spain), it’s important to stay calm; after all, the worst thing that is going to happen (provided you are only carrying a small amount for personal use) is that you will get a ticket and an associated fine. If you are a member of a professional private club, you should take that ticket to the club’s attorneys and let them handle it. Even though most clubs are legitimate, legal entities, it is critical that you never tell the police that you acquired the weed at a club.

Have you ever been stopped and searched for marijuana in Barcelona? Let us know in the comments, or send me an email and please provide as many details as possible about the event.

12 thoughts on “Barcelona Marijuana Users Targeted by Police for Possession”