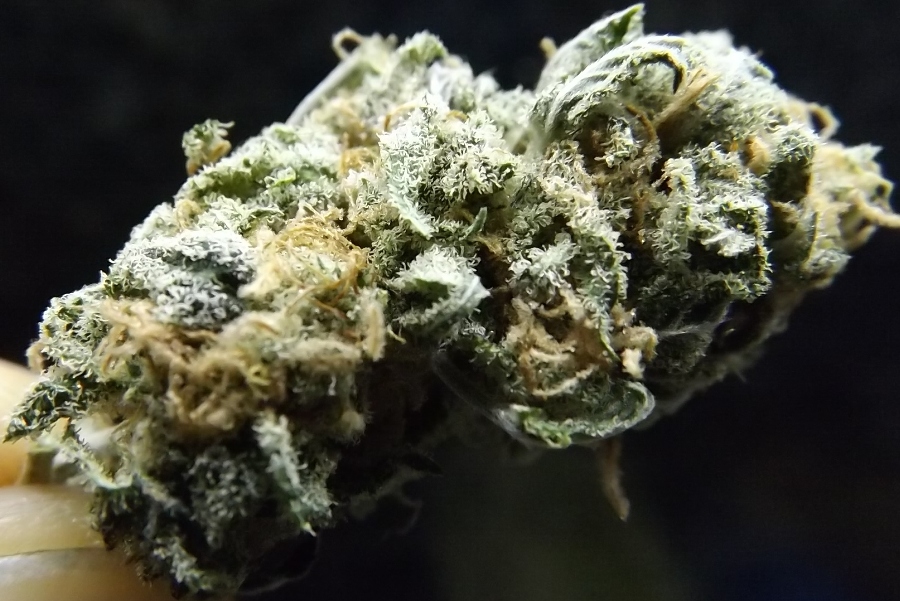 This marijuana strain is visually quite appealing. Seriously – one of the most striking features of Cream Caramel is that it’s beautiful. The buds are incredibly white and help to easily differentiate this strain from others. In fact, when I picked up a few grams of several different types of cannabis from the RDM club, I was a little concerned when I got them home and noticed they weren’t labeled in any way.

But no worries – the Cream Caramel was obvious! In fact, I’d say it’s some of the best-looking weed I’ve had in a while, and I hope the photographs let this shine through because the reality is that all of the whiteness (read; resin glands!) made it shimmer and shine in the light and created difficulties while trying to capture good shots.

Overall the buds are a little loose and elongated, which is different than a lot of other marijuana strains available in Barcelona right now. They’re a little sticky but not as much as the stunning whitish coloring would lead you to believe. The smell of Cream Caramel inside the bag does have a slight sweet smell that could be described as similar to caramel, or even some sweet flavored coffee like French Amaretto. The overall bouquet sits in the middle and smells like any premium marijuana, but the Cream Caramel strain has both a high and a low note; the low note is sweet like caramel and the high note is crisp like mint.

Interestingly, when you get your fingers into the buds and begin to break them up the smell increases substantially. Obviously this will happen with any marijuana, but it’s extremely pronounced with the Cream Caramel. This is important to note because while in the bag this strain might not be very noticeable, but if you start breaking it up with “squares” or authority figures nearby, they’re likely to smell it.

Despite its strong scent and delicious flavor notes, Cream Caramel doesn’t taste like much. In fact, it leaves almost no taste on your tongue and nothing at all up high in the sinuses or in the back of the throat. It is an exceptionally mellow-smoking weed, which would be great for someone with a cough or sensitive throat, or for taking massive bong rips without destroying your lungs. After 2 hits from a freshly cleaned bong, the high from the Cream Caramel cannabis strain came from the top of my brow and quickly slid its way down to the base of my neck – both in front and in back. My eyelids did not swell and get heavy, but weirdly this sensation was instead felt in my eyebrows. This made it feel like I was frowning somewhat even though I wasn’t.

By 3 hits I was thoroughly high and could have stopped there and been satisfied, but the review called for 4 big bong rips. After the 4th I was plenty high but there was still room for improvement. On a scale of 1-10 with 10 being the highest, I’d say I was hovering between 7 and 8 during the peak.

The high is mostly situated in the head and is a strong, effective and pleasant feeling overall, but it’s definitely not a “holy shit I’m high” kind of feeling – it’s relaxed without being tired and mildly euphoric without being intellectually crippling. Cream Caramel continues to peak for around 10-15 minutes after smoking and provides a sustained high that generally lasts for 2.5 hours or more, depending on what you’re doing during that time. Eating rapidly diminishes the high – especially cold foods and beverages.

I want to give Cream Caramel a 5 Star rating, but it’s just not potent enough. However, it’s such a good-looking and really quite pleasant strain that I’m tempted to anyway. But if I’m being honest the high just isn’t strong enough to warrant 5 Stars like the Jacky White or Yumboldt strains – the latter of which is the subject of my next marijuana strain review. To be automatically updated when that review is published, just use the site’s RSS icons. I also have a new Barcelona Cannabis Club review to publish in the next couple of days for the awesome RDM club on Calle Bailen – a club that rivals the 5-Star Abcda club.