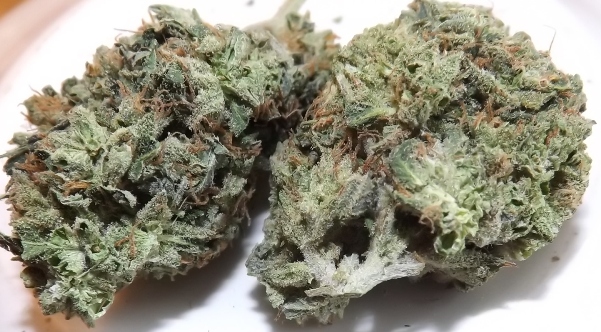 This marijuana strain review is for LA Blue, which is a new cannabis strain developed by an ambitious grower located in California. The LA Blue marijuana strain is a cross between the infamous LA Confidential and Blue Dream. This cross is an Indica dominant hybrid, but I am not sure of the percentages. Based on my experience, I’m going to guess it’s somewhere in the 60-70% Indica range. And considering that I picked this strain up in the frigid state of Maine, this weed is a long way from home.

[author-post-rating]
******UPDATE: I was contacted by the developer of this strain, who provided some interesting information. I mention in this review a couple of times that there is a distinct vanilla scent/flavor to this strain, which didn’t make much sense as attributes of either LA Confidential or Blue Dream. It turns out that I missing the lineage, which includes Chocolope. The grower produced at least 2 primary phenotypes; this review is for phenotype II. Click here to read a full feature review of phenotype I, which is called Silvia’s Blue.******

LA Blue buds are thickly covered in trichomes, but because the trichomes are relatively short compared to other strains, the buds don’t have the highly crystalline appearance you would expect, but nevertheless are loaded with crystals. Interestingly, the buds are not sticky but instead were quite dry and crumbly – possibly a result of having to travel long distance to reach this toker.

LA Blue consists of medium-green buds that are consistent in appearance, but occasionally interspersed with patches of darker green. All buds are nicely mottled with dark orange hairs, which overall represents a finished product that is visually quite appealing. I haven’t smelled bud like this for a long time. The first impression upon burying my nose in a baggie of this weed is that of sweet, fresh-cut grass, but there is also a hint of vanilla in there too – but it’s very difficult to “isolate.” Veteran cannabis connoisseurs will understand what I mean by this. The sweet grass and vanilla scent are mixed with a little bit of ammonia (which to me always indicates premium weed) and strangely, a high note of classic bubblegum. This high note is elusive like the vanilla, but it’s definitely there and even newbies will recognize it.

Surprisingly, LA Blue produces very little taste when smoked, but the overall impression is vaguely of fresh hay. This taste impression sits up high in the top far back of the mouth and right at the entrance to the throat, but it disappears rather quickly. In fact, the first hit of a bowl pack or bong of LA Blue is moderately flavored, but subsequent hits produce virtually no taste except that smoky aftertaste associated with weed/cigarettes/cigars or virtually any smoke.

One of the best aspects of LA Blue is that the smoke is strikingly mellow. This allows for really big bong rips that I just wouldn’t take with other cannabis strains in an effort to protect my throat. But LA Blue is so mellow you can take monster hits with ease. After 2 hits from a freshly cleaned and packed bong, I was initially unimpressed as I only felt a very mild high that was situated mainly in the “mask” zone and particularly in the eyes. But as I mentioned, this was disappointingly mild. Fortunately this weed has a unique peaking property where the high increases for 8-10 minutes after each hit. (If you wait that long. I always measure at 2 and then again at 4 hits. 5 Star weed invariably gets me wrecked at 2 hits; lesser weed requires the full 4 hits.) So about 10 minutes later I was actually feeling quite high – not enough to be fully satisfied, but plenty high.

After 3 big bong rips the high increased dramatically, spreading from the mask zone to the top and back of my head, forehead, left ear and part way down the back of my neck. After the standard measure of 4 bong rips the high caused my eyes to partially close, a pleasant and strong euphoria came over me and I felt quite motivated. At this point the high moved down the back of my neck and spread to my shoulders and upper arms. This to me means this is a good medicinal strain, as I normally feel zero body effects from most types of marijuana. However, it’s interesting to note that my girlfriend (a fairly experienced but not a veteran smoker) felt strong body effects almost immediately. As mentioned previously, the high increases after each hit for a period of up to 10 minutes. Overall the peaking period is about 20 minutes when finished smoking. After the peak is achieved the high remains strong for approximately 2 hours, which means that this is not a long-acting type of high. But during these two hours the feeling is definitely one of motivation and not couch-lock. This is an excellent strain to get nicely high and still perform physical or mental tasks efficiently.

While physical activity does not lessen the high from LA Blue, eating does. Cold foods and beverages reduce the high significantly if consumed one hour or more after smoking. Hot foods still reduce the high, but not quite as much.

LA Blue is a strong 4 Star performer, best suited for people seeking a potent but active high. This strain has moderate to strong medicinal properties and would be an excellent treatment for muscle aches and pains, headaches, and joint pain in the shoulders and neck. The potency of the high does not match strains like Cheese, Black Lemon or Jacky White, but it is better in my opinion than most types of Kush and ultimately it wouldn’t take much genetic work to push LA Blue up to a 5 star cannabis strain.